The Lord, God, revealed some interesting information to me earlier today when he dropped by my office to return a Blu-ray copy of “Blood Sucking Freaks” I recently lent him.  Here’s what he told me: “I learned that Russell Crowe was going to be playing Noah just after seeing him in “Les Miserables” last year. The rattling vibrations of white-noise he emitted while “singing” in that film, combined with the idea he’d soon be playing Noah, sent me into a berserk, animal-like rage. I transported myself back in time and sent the real Noah’s Ark, and everything on board her, to the bottom of the ocean. 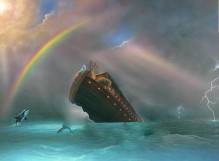 The story of Noah’s Ark has been official removed from The Bible because no one lived to tell it, thus ensuring that no movie about it will ever be made with Russell Crowe as Noah. This helps lessen Crowe’s over all film appearances and the chance we will have to endure his singing again should he decide to add a song or two into more of his films. Feel free to say, ‘Thank God for that,’ because it WAS me who did it.”