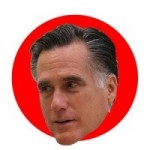 Mitt Romney released a statement today saying his disappointment over having lost the last Presidential Election to Barrack Obama has finally been washed away. The Mormon Church has granted him the title of “God” and has presented him with his very own planet to lord over. “I can not tell you how happy I am to be God,” said Lord Romney. “I mean it FUCKIN’ ROCKS PEOPLE!!! I truly love the Mormons. What other male dominated religion out there offers men such an awesome fringe benefit for practicing it? I’m not sure where my planet is yet, but I’m heading there in an hour. I’ve been told it’s about 6000 light years from Earth, so in all likelihood I’ll never be back.

I’ll miss some stuff perhaps, but my over-whelming sense of omnipotent power is quickly wiping away any sense of loss I’m experiencing from leaving.” Lord Mitt could not be reached for further comment on this exciting announcement. The photos shown here, of the new God and his planet, were released about an hour ago by The Mormon Church’s publicity dept.

This Tiny Primate Was Once A CERN Scientist.

While seeking the experience of traveling at the speed of light, a CERN scientist became trapped inside a particle accelerator for 12 hours because he forgot he wouldn’t be able to turn it off once he was flying through it at light speed. A janitor noticed the device was running while mopping, and turned it off. The accelerated scientist emerged from it as a tiny monkey who immediately peed all over the janitor’s freshly mopped floor.

Elmer Fudd, the beloved Warner Bros cartoon character, announced today that he will no longer hunt for his elusive arch nemesis, Bugs Bunny. Instead, Mr. Fudd stated, he will point his rifle at targets easier to hit, namely, liberals, a-theists and anyone having ever read a book by Christopher Hitchens or Richard Dawkins. “Bugs was just too hard to kill,” Mr. Fudd said. “Wiberals and dose who don’t beeweeve in our Ward Jeebus Chwist are easier to kill and deserb to die fer der horrible beweefs.”

It’s uncertain how seriously Mr. Fudd’s threat should be taken, however, because he is only a cartoon character firing cartoon bullets. Thus, the likelihood of anyone actually being hurt by him is practically nonexistent.

Christian Militants Say, Be A Nazi: Burn A Book

Omaha, Nebraska.   A Christian militant group calling itself “Whites With Guns For Christ” is hosting a book burning/barbecue this Saturday in Omaha. The group hopes to eliminate 50 to 60 percent of all books in Nebraska with the word “evolution” in them with the event. Group spokesman, Thaddeus Dingledoddle, had this to say on the matter, “It’s all about love, people. Love. Love of Jesus. Love of guns. And love of America. Books that are about evolution or even mention evolution are evil and were written by people with sick, diseased minds. Since we can’t yet burn the people who write such garbage, we’ve chosen to burn their books instead. Only those who know the true love and the all-encompassing Grace of Our Lord and Savior, Jesus Christ, should be allowed to share their ideas in writing. It worked for Adolf, and it can work for us. Amen.”

Texas In Space And Free Of Liberals At Last

Like a date who keeps sticking her tongue in your mouth while you’re trying to watch a movie, it is time Texas be asked to go sit on another couch. Really, enough already. Our ancestors didn’t come out of a fucking cave to eventually be forced back into one. If Texas were gone, it would not only be better for the rest of America, but for it as well. Texas would be free of pesky-ass, liberal assholes like me who think the death penalty is wrong, women actually have a right to their own bodies, and guns need to be banned. They could lock chastity devices on women, make everyone go to church, the RIGHT church of course, and they could freely kill any person they deemed was evil or wearing a hoodie. And I have come up with a great idea on how we can cut Texas free that will make everyone involved happy.

Let’s put rockets under the bedrock of Texas and blast it off into space!!! It would never have to see us again, and we’d never have to see it. It would be its own planet practically. And if this works, and why wouldn’t it, we could do the same thing to Florida too. Amen and Hallelujah!

Joe Eisenberg, the zoo keeper responsible for cleaning animal cages on
Noah’s Ark, ended several thousand years of silence today when he
appeared on The Tonight Show, and announced, “I’m the
guy ‘The Bible’ writers conveniently forgot to mention when writing the
Ark story. They left me out cause I did the all dirty work that no one
likes to think about. Literally, ALL the dirty work! I mean 40 days
and 40 nights of rain, PLUS months of drifting around looking for dry
land, and NO ONE thinks to mention the guy who scoops the poop out of
all those animal cages? Just imagine the stench if I hadn’t been around to
keep things tidy. And Noah was not the most considerate ship’s captain
around either. One night he gets piss drunk on some kind of grain
alcohol he’d made and feeds the elephants chocolate, just for laughs.
CHOCOLATE for God’s sake! The mess was UNBELIEVABLE!!!! And who
cleaned it up? Noah? Nope. Me. I’ve stayed silent for several thousand years now, but it’s time I had my 15 minutes of fame for all the shit
I had to deal with back then. Literally. So like it or not folks, here I am, Joe
Eisenberg, the animal poop cleaner for Noah’s Ark.”

It is hard these days to remember all you need to about the potential dangers posed by hoodie wearers. Hoodies are the preferred outer wear for common thugs, non-white, teenage male goons, and Catholic priests who rape little boys. But hoodies are also sometimes worn by people who are Christ-like and wouldn’t hurt or hate anyone the Bible doesn’t tell them to. So how can we tell which hoodie wearer is bad and which is not? I put together a few pictures to help answer this question.

This first one is to help you hone your gut instincts around hoodie wearers. Look at the picture below and ask yourself, “Which teen do I just KNOW is a dangerous rapist.” If you’re a God-loving, “traditional” American you’ll know the answer in your gut.

Which Of These Young Hoodie Wearers Is A Rapist?

This next picture is of a headless ghost wearing a hoodie. Obviously, run like hell if you bump into one of these. They’re supernatural, and they’re scary. I included the picture only to show you the variety of dangers hoodie wearers can present.

Headless Ghost In A Hoodie

This last picture is of a proud NRA member, armed with three concealed handguns, loitering outside a store looking for unsavory characters to protect you from. Like Batman, he may look dangerous, but isn’t, unless he has reason to think you’re unsavory.

I hope this helps makes being around hoodie wearers a lot safer for you. Amen.