Dark Matter filed a racial discrimination suit today against the Chicago Transit Authority claiming it’s bus drivers consistently refuse it entry to their buses due to it being Dark, and not White, Matter. CTA spokesman, David Dicka’man denies this, and claims it is fear, not color, that’s keeping CTA bus drivers from letting Dark Matter on the bus. “They’re terrified that Dark Matter will vaporize any bus it enters as it expands outward, toward infinity, with ever-increasing speeds, as is its nature,” Mr. Dicka’man said. 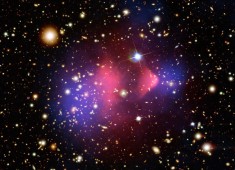 “That’s total bullshit!” Dark Matter retorted, when told of Mr. Dicka’man’s statement. “Those stories about me bein’ some kinda’ super-fast, expanding, unknown something or other are not true, and they know it. My doctor sent a registered letter verifying this to the CTA months ago. I’m not allowed on those buses for one reason only: I’m black. And THAT is mother-fucking THAT! If I were White Matter and not Dark, we would not be having this discussion right now. They’re concerned a bus could be vaporized if I rode it? What kind of racist bullshit is that?! Fucking cracker-ass CTA can eat my black, Dark Matter, fat, dimpled ass. This is 2014 Chicago, not 1955 Birmingham. They ain’t doin’ shit like this and gettin’ away with it. I’ve got some excellent lawyers workin’ on this, and I’m gonna sue the ‘A’ right off the CTA. Racist mother fuckers. Terrified I’m gonna vaporize a bus, eh? They need to be more terrified of the amount of money I’m gonna vaporize from their bank account. Bastards!”