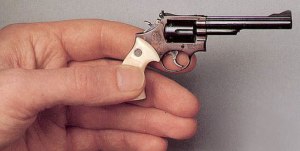 17 thoughts on “New This Christmas, The ‘Lil Republican Hand Gun”