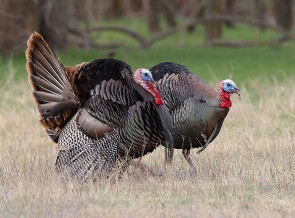 A devastating blow against Christian Conservatives and Tea Party advocates alike was struck this morning when Giant Turkeys materialized simultaneously in Texas and Florida and completely devoured both states.  Nothing remains where the two states once stood but a light covering of Giant Turkey shit.  Before returning from whence they came, the leader of the Giant Turkeys, Mr. Gobble Yercock,  gave an insightful, informative interview to TACP’s editor ‘n chief, me.  The transcript of this interview, without any embellishment by TACP, is presented below.

TACP:  Let me begin, Mr. Gobble Yercock, by saying, what a fucking entrance! Yesterday no one knew Giant Turkeys even existed, and today, BAM! You’ve devoured both Texas and Florida and it isn’t even noon yet. Impressive, most impressive. 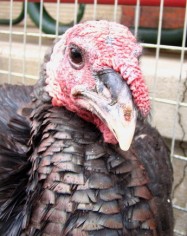 Gobble Yercock: Well, what can I say. We’re a dramatic entrance bunch, we Giant Turkeys. We specialize in the eradication of parasitic conservative vermin via consumption as soon as their presence becomes known to us.  We live in the realm between realms ( I had to write that) where all sentient beings work to ensure all sentient beings are treated as equal sentient beings.  We have a kick ass health care system, and we allow all beings to believe in whatever fantastic invisible deities they wish as long as they never once try to impose said deities onto anyone else not wishing to hear about them.

TACP: Does that really work?  I mean, here in America, we actually have the words “SEPARATION OF CHURCH AND STATE” written into our Constitution, but in reality, nothing could be further from the truth.

Gobble Yercock: Oh, it works because the only crime one can be sentenced to death for where I come from is the crime of forcing one’s faith onto another. Do that, and you die. Period. The act of forcing a mythological deity onto others produces a foul smell which transgresses the barriers of space and time. We’re rather sensitive to that smell. That’s why we ate Texas and Florida this morning. The Right Wing Christian Conservative stench drifting from those two states was so vile it drifted into the realm between realms and was making us sick.  We took care of that I’d say, eh? And we’re coming back for a few more U.S. states in a few weeks. Then it’ll be on to the Middle East for us. But first, we have to digest all the Conservative bullshit we swallowed this morning.

TACP: Sounds great. Well, have a great Thanksgiving, Mr. Gobble Yercock, and thanks for doing what you do.

15 thoughts on “Texas And Florida Devoured By Giant Turkeys”