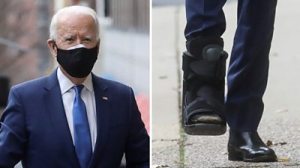 “I kicked him in his big, fat, orange, poop-filled, diapered-ass and broke my god damn foot! Jesus, but does that guy lay a solid friggin’ load! OUCH!!”

OAN City, California.   President-elect Joe Biden today revealed he’d broken his foot while kicking current President Trump’s ass in the November 3rd election.  “Man, it felt GREAT to kick that guy’s ass, but, god damn, he musta laid a huge, solid load in his poopy diaper when I did it cause I broke my god damn foot on it!”   Soon to be ex-President Trump could not be reached for comment on this issue.  It’s believed he’d pooped his diaper again when we asked to speak to him and was being cleaned and changed when we called.

“I want to thank President-elect Joe Biden for resurrecting me from the dead to put me in charge of the CIA,” Hugo Chavez said earlier today.

OAN City, Utah.  President-elect Joe Biden today used some of the evil powers he’s gained over the years from worshiping Satan to return Hugo Chavez from the dead in order to place him in charge of the CIA.   “Yeah, I figured, what the fuck,” Biden said earlier,” why not use some of the evil powers I have as a Satan worshiper and a Democrat to return Mr. Chavez from the dead in order to have him do my bidding in the CIA.  Hugo is SOOOOO glad to be alive again, I’m certain he will do whatever evil thing I and my fellow leftist Democrats instruct him to do.  So, LOOK OUT, former President Trump and Trump supporters!  I, and Hugo Chavez, are comin’ for ya!  Hahahahahahahahaha!!!” 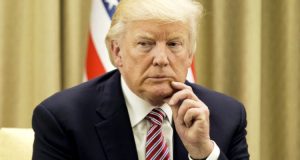 Trump: The Smartest Person To Have Ever Lived

Brilliant Valley, North Carolina.   President Trump today announced he was asked to recite the alphabet by his family physician to test his cognitive health and only missed one letter.   “Not only did I miss just one letter,” Trump said, “I also recited 18 of the remaining 25 letters in the correct order.   Now, let Joe Biden try to top that, eh?!  My physician told me my performance on this ‘alphabet test’ PROVES my mind is operating at a genius IQ level.  He also told me that the letter I missed, ‘X’, I believe it was, is a stupid letter that only stupid people like Democrats would remember anyway.  And just let Joe Biden try to get 18 letters of the alphabet in the correct order without mixing up a few!  Ha!  He couldn’t get two in row right much less 18!  SAD!!  So, as all who are fair to me and intelligent can see, my mind is operating at peak capacity and I’m clearly the most qualified person to be President.  Period.  End of story.  MAGA!”