In the Vatican Sunday, Pope Francis announced the canonization of two new Saints, Pope St. John Paul II and Pope St. John XXIII. What a bloody yawn fest! I mean, really, is anyone surprised by this? No? I didn’t think so. Typical Catholic BS, canonizing two of their own into sainthood while ignoring all the other, non-traditional, less Catholic, candidates out there who’d make terrific saints given the chance. I’ve put together a list of five unique people I feel Pope Francis simply must consider for sainthood. Most, if not all, have displayed some sort of miraculous power at one time or another, too, which should make the Pope’s decision to canonize them a no brainer. Here they are.

1.) Obi-Wan Kenobi: Obi-Wan fought alongside Princess Leia’s father, Bail Organa, during the Clone Wars and started Luke Skywalker on his path to becoming a powerful Jedi Knight. He can do cool Jesus-like shit through his mastery of the Force, and would be an awesome Saint to help God in his fight against the Devil. 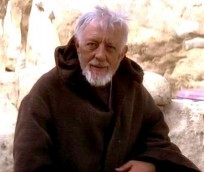 St. Obi-Wan Kenobi Of The Jedi

2.) Arthur (The Fonz) Fonzarelli: What else is there to say about the Fonz except that he is the King of Cool! His ability to calm rambunctious teenagers who are hopped up on hormones and narcotics with just a raise of his thumbs and an utterance of his patented, “Cool It!” makes him the perfect choice to become a Saint so cool even atheists will love him. 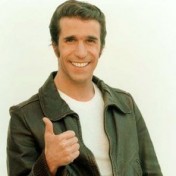 St. Arthur Of The Order Fonzarelli

3.) Gandalf: Not to award Gandalf with the title of Saint after all he’s done to help both Bilbo and Frodo Baggins in their battles to keep Middle Earth free of evil would be akin to reforging the One Ring and turning every Hobbit in the Shire into a flesh-eating ghoul with it. As well, Gandalf’s magic would be most helpful in finding and killing the demons of Hell that hide under our beds at night, should he become canonized.

5.) Thor: I love Thor. He’d be a kick-ass Saint and would strike fear into the hearts of Satan and his hideously evil minions by blasting them with lightning from his hammer Mjolnir. Plus, Thor’s already a God, so making him a Saint, too, should not be a problem for the Pope.

30 thoughts on “Five People Who Should Be Made Saints”