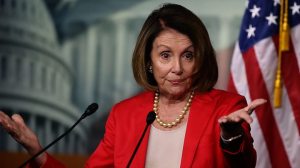 “We’re Not Going To Do Anything They Haven’t Been Doing For Years,” Nancy Pelosi Said Today

Quid Pro Quo City, Ukraine.    In a shocking statement this morning Nancy Pelosi, the Democratic Speaker of the House of Representatives, announced her plan to ask China to help Democrats win in 2020.  “I mean, why the hell not,” said Speaker Pelosi. “President Trump and the GOP have been doing things like this for years.  Hell, I doubt they could’ve won ANY election in the past 20 years without outside help.  So, I figure, it’s about time we did the same thing to help keep the political playing field level.  I was just on the phone with Chinese President, Xi Jinping, and promised him that if he can get us dirt on, and nude photos of, Donald Trump and Senate Majority Leader, Mitch McConnell, we would gladly lift all tariffs on Chinese goods when we take over the Federal Government in 2021.  He was more than happy to oblige me and even said, ‘What took you so long to call?  We’ve been eager to help you guys cheat to catch up with the GOP for years now!  Hee Haw! Time to kick some Republican ass!’  Needless to say, we Democrats are thrilled with this development and hope to use Chinese help to seriously bend the 2020 elections in our favor.  Well, until then, God bless America.  God bless Democracy, and God bless free, open, and fair elections.”

In a brazenly crude act which has greatly increased the tension between Russian President, Vladimir Putin, and his American counterpart, Barrack Obama, Putin hacked into Obama’s Facebook account this morning and posted several sexually explicit nude pictures of NSA whistle-blower, Edward Snowden on it.

Vladimir, You’ll Pay For This!

“This is retaliation on Putin’s part for me freezing him out of his Netflix account Monday,” a clearly offended President Obama said earlier. “I warned him I was going to kill his Netflix account if Russia used its military in the Ukraine over this Crimea bullshit, and he used it any way. I know exactly what he’s up to too, the Commie bastard. He’s sucked Crimea up into Russia as if it were merely a tiny piece of some Soviet Union puzzle he’s trying to reconstruct. I knew he’d be pissed about losing Netflix, but I never thought he was so twisted as to do something like this. Hacking into my Facebook account and posting pictures of Edward Snowden nude, in explicit sexual situations with light posts, mail boxes, owls, and lawn mowers is just not something the President of the United States will tolerate or easily forgive. My wife and my daughters saw that sick filth!

Putin: “The Pics Were Quite Tastefully Done, IMO.”

President Putin needs to be aware of one thing right now: He really fucked himself by doing this. I don’t know how in the name of God he got Snowden to do what he was doing so gleefully in those pictures, but I’m personally going to make him pay dearly for posting them on my Facebook page for my family, and the nation, to see.

Beginning tonight, and continuing every night for six months, my personalized, stealth drone, ‘Obama’s ‘Lil Bomber,’ will be making a trip to drop hundreds of pounds of raw sewage onto the front lawn of whatever abode Putin happens to be staying in that night. If he stays in a hotel, the sewage will be dropped there. Also, if he decides to leave Russia and visit, say, Buckingham Palace and spends the night there, the sewage will be dropped on Buckingham Palace’s front lawn. There will be no escape for him from this. Hopefully he’ll learn from this and not do anything like this to me ever again. It was really, really mean.”