Russian President Vladimir Putin said today, while holding back tears, that President Obama called him a putz and a sissy for releasing a statement, addressed to the American people, which was very critical of American policies in the Middle East and on Syria in particular. “I can understand President Obama being angry with me,” Mr. Putin said, “but he did not have to call me in the middle of the night just to call me a putz and a sissy. Name calling is very immature and cruel. It leaves deep psychological scars on its victims. It may not be obvious to everyone, but I’m a very sensitive person, and when people shout at me and call me names, well, it hurts. I’ve been in tears since getting off the phone. I demand that President Obama call me back and apologize. If he doesn’t, well, that will just be one less Christmas card I’ll be sending out next year then, won’t it?!” 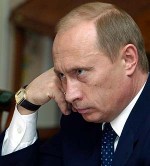 Obama: “You’ve Got To Be Fucking Kidding Me?!”

President Obama today said too much time had been wasted on debates about whether or not we should launch a military strike against Syria for its recent use of chemical weapons. “It’s time to hit those bastards hard for using that weapon. It caused great pain and suffering to those struck by it.” The President said. “So I’ve decided to deploy a secret pain inducing weapon of our own to Syria to show its leaders exactly what unfair, nasty, ugly warfare is like. Secret weapon, Miley Cyrus, will enter Syria and wag her tongue at every Syrian Official she finds. She will then gyrate her skinny ass in their faces while she sings every song in her catalog over and over and over again. Psychologists have determined no human mind can tolerate more than 30 minutes of this treatment without suffering a complete and irreversible psychic collapse. After Ms. Cyrus is finished with Syria, I absolutely fucking guarantee you they’ll never use a chemical weapon again.”