And now, so the drinking can begin, the conclusion of “Baby New Year Arrested For Solicitation: New Year On Hold.” A story “Time” magazine has called, “An unclassifiable assemblage of English words, sentences, and paragraphs so far beyond necessity, one can’t help but feel they must surely mean SOMETHING to SOMEONE, SOMEWHERE.

“Moses: OK, Kid. Listen up. There’s one thing you’ve got going for you here that no Right Wing, Tea Bangin’, Christian Conservative Texan can deny: You, Kiddo, are an unborn fetus! You don’t “officially” get born into this realm until midnight tonight, when Old Year 2013 gets sent packing to the Palooka Ville retirement home for years gone by. Just because you jumped the gun and decided to go cruising for a bit of nooky before your official, shall we say, expulsion from the womb of time, doesn’t make this any less a fact. You are a gestating timeline of an infant, and you can not be withheld from your birth into the world of existence without those preventing said birth from being labeled abortionists for doing so. Thus, to keep your perverted ass locked up here in Corpus Cristi, rather than letting you be born, is akin to killing you via an abortion.

Baby New Year: Wow. That’s awesome lawyer thinking there Moses. I’m impressed. Get me outta here, and tonight, you can join me for some of the best partying your withered old arse has or will ever see.

Moses: No thanks. Jesus and I watch “Casablanca” every New Years Eve, and I wouldn’t miss that or his special “Savior Seasoned” popcorn, for anything. I think Elvis and Christopher Hitchens are joining us this year, too. Great guys, but back to you.  They’re coming to take us to see the judge in a minute or two. Just let me do ALL the talking, and we should be fine. OK?

There is silence on the SETI tapes TACP used to transcribe this truth-ridden tale of the odd, for several minutes. Then a final statement is clearly heard being given by Judge Righteous M. Fukker, the judge who apparently heard Baby New Years’ case. This statement is presented below without one tiny thing about it being made up or exaggerated in the least. 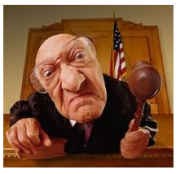 Judge R.M. Fukker: Well now, don’t that all just sound like a Yankee Liberal abortionists’ wet friggin’ dream come true, eh boys? You damn Yankees go around pullin’ fetuses outta Christian women’s wombs up north like you was no more than pullin’ lice outta some youngin’s hair when it suits yer fancy ta do so. Ain’t that the som’bitchin’ truth, eh boys? And now you all is gonna tell me, an honored and highly respected judge, that I shouldn’t hold this here perverted little shit-ball hooker chaser in my jail cell til his arm pit hair grows grey and chokes him to death because I’d be performin’ an ABORTION by doin’ so myself? Well ain’t that the som’bitchin’ truth of it then. Not a bad bit of lawyerin’ there old Jewish feller. Not bad at all. I’m gonna let yer little bastard buddy go with just a warnin’ this time, but fuck up in Texas again, boy, and I’ll send you away for so long there won’t be time to tell time by when yer abortion lovin’ a-theist Yankee ass gets out. Ya god dang som’bitch ya!

Moses: He’ll behave your honor. I promise you. And thank you very much, Sir. 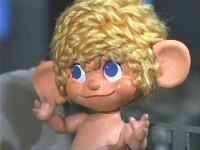 Baby New Year: Yes. Thanks. And Happy New Year to you and to all the readers of The Arm Chair Pontificator, where cannibalism is only bad if you under cook the meat.