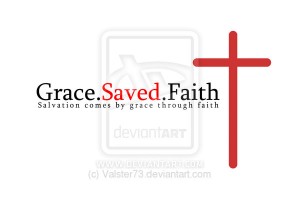 The concept of Grace used to come up quite often during my 15 years of formal Catholic education, but I’ve retained little of what I learned about it back then.  So I recently decided to re-enlighten myself on the subject by reading what the Catholic Church and one or two other Christian denominations had to say about it.  In all honesty, if I hadn’t already been an a-theist, I’d have become one based solely upon what I read.  Though there are subtle semantic differences to how, say, Lutherans and Catholics define “grace”, the basic premise, and one I find deeply insulting, is fundamentally the same.  Because of Adam and Eve’s original disgusting sin, little ‘ol me and you were born into this world with our immortal souls awash in filth, evil, debauchery, and contempt for God, our Master.  It is only by the “grace” of this same benevolent and all-loving Master that the rancid stench of insipid evil can be bleached from our souls and save us from an eternity of burning agony in Hell.

Our Master sending his beloved son, Jesus, to be brutally tortured and crucified on our behaves is the only “grace” needed to save us, according to some Christian doctrines.  Others claim we must more actively earn the Master’s “grace” through obtaining sacraments and verbally abusing gays, Jews, and Democrats.  Even others say we have the Master’s “grace” and are saved, or we don’t, and will burn. Period. We won’t know which, until we die and awake either burning in Hell or having amazing oral sex performed on us by the person or persons we most want performing oral sex on us in Heaven.

I find such beliefs to be immoral, repugnant, anti-human, and personally offensive.  I am not evil and I do not require a made up creature to give me “grace” for anything.  Such thinking, in my completely honest opinion, is at the core of man’s inhumanity toward man. This includes all forms of child abuse, rape, war, torture, and poverty. Human beings are not born stained.  It is doctrines like those describing “grace” that stain the collective human consciousness with a guilt it neither deserves, nor needs. We are all there is of us.  No god or grace from a god is needed to save anyone. We are important to ourselves because we are here.  And if tomorrow we are not here, there will be no one to notice, much less care. We truly are THAT unimportant to the universe.