Vote Early ‘N Often City, New York.   Hello to my fellow Americans and fellow voters.  I’m here to tell you that I’ve just ordered 56 thousand mail-in voting ballots for myself and will most certainly cast all of them for Joe Biden so I can help him win the same way I helped President Hillary Clinton win in 2016.  It is SOOOO easy to vote as often as you want in America, that I encourage EVERYONE to do it. It’s easy to do, AND, it’s perfectly legal in most states–even my dog voted in 2016 for Hillary.  How else could she have won, eh? 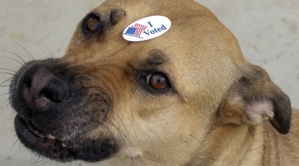 So, to all those Trump supporters out there who are worried that the Dems are gonna cheat, I say this: We are gonna cheat!  And so should you!  It really, really is easy as pie.  Just request as many mail-in ballots as you can fill out in 3 or 4 weeks and vote away!  Then, on Nov. 3rd, go to your local polling place as many times as you want and cast multiple ballots for Donald Trump.  Christ, if it worked to get Hillary elected in 2016, surely it can easily work to get Donald elected this time.  You simply MUST vote as often as possible, Trump voters, or the Dems are gonna beat your asses like they did in 2016.   Oh, before I leave you to it, please remember to brag to everyone you know, and to the election officials at your voting place on election day, that you are voting multiple times.  Everyone will thank you for it; tell you it’s legal, and gladly tell you what a great American you are.  So vote away, Trump supporters!  Princess Donald is counting on you!  $Amen$

13 thoughts on “Hey, Trump Voters! It’s Super Easy To Vote Multiple Times So Do It”