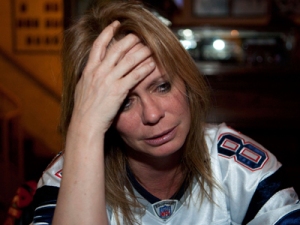 Foxborough, Massachusetts.    New England Patriots fans are saddened today because God announced he favored the Eagles in last night’s Super Bowl, and that’s why they won.   “Yeah,” God said earlier, “the Patriots and their fans just didn’t pray hard enough for me to allow them to win this year.  The Eagles and the folks in Philly prayed and worshiped my ass SO much longer and harder I just couldn’t let them lose.  Lots of Catholics in Philadelphia, too, and that’s NEVER a bad thing. (My son’s a Catholic, FYI).  As well, the New England area is starting to crawl with atheists, and there’s no way in the Hell I created that I’m NOT gonna punish THAT sh*t–big time!   Of course, just to f**k with Patriots fans, I let the game stay close enough for Tom Brady to pull off one his miracle comebacks before making him fumble the ball so the Eagles could recover and score an additional field goal.  Ha, ha, ha!  That was a riot.  Brady’s a Trump supporter, too, and I HATE that guy, so there’s another reason I let the Eagles win.   Yeah, Tom wants to help Trump make America great again cause it’s been just so awful for him living in it.  Right, bite me.   Any-who, I gotta run.  There are a few famines and plagues I’m cooking up to smack Africa with and those take time to do right or they won’t kill and make enough people suffer.  We couldn’t let THAT happen now, could we?”