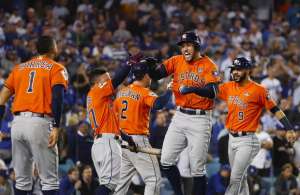 Houston, Texas.     The Houston Astros won the World Series this past Wednesday because it is what God wanted, at least according to God.   “Yeah, after listening to prayers from both the Dodgers and the Astros, I decided that the Astros prayed better, longer and harder than the Dodgers, so I let them win,” God said earlier today.   “I don’t usually like sports teams from Texas, but in this case, I made an exception.   The Astros showed such humility and deep respect for Me, that I simply HAD to let them win.  As for the Dodgers, they just didn’t convince Me they loved and honored Me enough for Me to let them win.

As anyone who knows Me can tell you, I do good things only for those who worship Me best.   If more people would simply understand this, there’d be fewer earthquakes and hurricanes in the world and much more food and medicine for everyone to enjoy.  Oh, also, and I simply feel compelled to mention this, Me being Me and all, as a general rule, I pretty much only accept and listen to prayers from those who practice the one, true religion.  There’s only one that I really consider to be correct, but, Me being Me again, I’m not going to openly say which one it is.  So, take a guess, and maybe you’ll be right or, hopefully, on the particular day you pray, I’ll be in a generous mood and listen to you any way.  If not, don’t count on your team winning the World Series any time soon.”