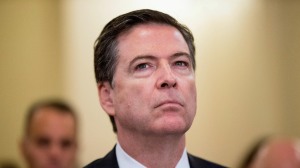 Washington, D.C.    Just a day after former FBI Director James Comey gave his testimony about Donald Trump to Congress, he was found dead in an alley behind the White House with 6 bullets in his head.   “This is an obvious suicide,” said White House Press Secretary, Sean Spicer.  “Clearly, Mr. Comey was distraught after telling all those horrible lies to Congress about his conversations with President Trump.  He must have immediately regretted his words, gotten drunk, purchased a .38 caliber pistol, wandered into an alley behind the White House, and shot himself 6 times in the head.  SAD!  Isn’t it?  This shocking and tragic act by Mr. Comey proves, without any possibility of doubt, that President Trump is the most innocent, most persecuted, most unfairly judged President who has ever, ever lived.  President Trump, and those closest to him, would like to send their condolences to Mr. Comey’s family and friends, but they can’t because they’re so fuckin’ happy he’s dead.  Good riddance, ya’ lyin’ bastard, ya’.”