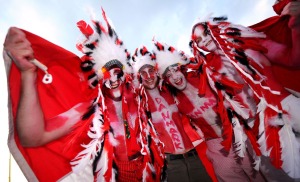 Chicago, Illinois.   A group of savage, beast-like, Danish aborigines was spotted today terrorizing people in Downtown Chicago.   “They were hideous,” said eyewitness William Handsonbutt.  “I saw them as I was crossing the street near the Water Tower Place, and, when I made eye contact with them, they let out a wild yelp before making frightening gestures at me with their fingers.  Their faces were covered in some sort of war paint and, by the horrid sound of their cries, I knew they were out for American blood.  Luckily I was a sprinter for my high school sprinting team and, thus, was able to quickly run away before they could tear me limb from limb.  I beseech anyone else who sees them to notify the authorities immediately and to stay as far away from these twisted, subhuman creatures as possible.   Danish aborigines on the streets of Chicago.  What’s next, Swedish aborigines in New York?”