Here are a few pictures of famous Dicks.  Some of these Dicks are also assholes.  I’ll leave it to the reader to decide which of them this applies to. 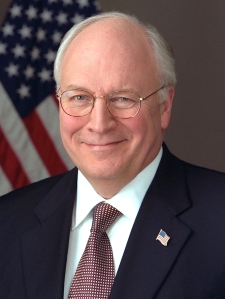 Dick Cheney was U.S. Vice President from 2001 to 2009. In 1950, his great Aunt Bertha said of him, “Our little Dick is one helluva a little shit. He’d shoot his own hunting partner given the opportunity. Thank goodness he’ll never become Vice President under the leadership of a half-brained twit of a President. Lord only knows what kinda shit-storm he’d create should that ever happen.”

Actor Dick Van Patten, 1928-2015, was best known for his portrayal of the father on the 70’s TV show, “Eight Is Enough.” He was beloved by his fellow cast members on that show. Co-star Adam Rich once said of him, “He never dicked around on set, and he always knew all of his lines.  He also bought me lots of ice cream and candy. I liked that, though it rotted my teeth, and the subsequent dental work really sucked.”

King Richard The Third of England, 1452-1485, was known by his childhood friend, Charles Pumpernickel The First, as a “Real dick who often took milk from babies.” Shakespeare immortalized Richard in his famous play, “A Dude Named Dick Who Killed Lots ‘O Folks”.  It’s a great play for those of you who’ve not read it.

90-year-old TV icon Dick Van Dyke is so beloved by fans of his 1960’s television show, “The Dick Van Dyke Show”, that thousands of them send him Christmas cards every year which read, “Merry Christmas, Dick. We friggin’ love ya’!”

Richard Nixon was President of the U.S. from 1969 to 1974. His White House man-servant, Jeeves Smithers, said of him, after he resigned the Presidency, “That f*ckin’ dick went and resigned without paying me the remainder of the 70,000 dollar a year salary he owes me. If I ever see that squint-eyed bastard again, I’m gonna beat ’em senseless.”