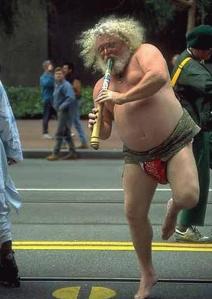 Big Building City, New York.   Santa Claus was arrested today on charges of public indecency and possession of marijuana outside Macy’s Dept Store in New York.  “I’m deeply embarrassed by my behavior,” Santa said earlier.  “I’ve been under tremendous stress because of the atheist war on Christmas which takes place at this time every year.   Last year, Rudolph was shot through his back left hoof by an atheist drone while we were flying over Chicago delivering toys to Christian kids on Christmas Eve night.   We’re both still suffering from PTSD because of it.  I find that the only way I can deal with it is to strip down to my underwear, fire up a big ass pipe full of weed and dance in the streets while smoking it.  I’m awfully sorry to all the Christian kids I’ve let down by my behavior.  I just wish these damn atheists would stop trying to kill me every Christmas.  It is, as this incident proves, causing me great emotional distress.”

34 thoughts on “Santa Arrested For Smoking Weed In Public”