The Only Photo Of Bigbutt Known To Exist

Sphincterville, Wisconsin.    Undoubtedly, if you are a true-blooded, God-fearing American, you’ve heard of, and most likely believe in, a creature known as Bigfoot.  Well, what you most likely do not know, is that Bigfoot is not alone in the woods of America.  He has a lesser known, though no less elusive, cousin known only as Bigbutt.   Bigbutt was first sighted and photographed about 2 hours ago by a drunken hunter named John “Sharp-Nipples” McGinn whilst he was peeing in the woods near his cabin in Fish Creek, Wisconsin.   “Ah wen’ out ta take me a huge pee, when alluva a sudden, a huge, hair covered butt come a walkin’ at me from outta da trees,” Mr. McGinn told reporters an hour ago.  “Da dang thing had ta be a’ least 4 foot across ‘n 3 foot high.  I took out ma phone ‘n I snapped da picture of it y’all see here.  The dang thing smelled kinda like a day old burrito dat was left out in da hot sun o’ August.   I screamed like a young gal who juz got ‘er first un-asked-fer kissed when I sawed it.  Dat made it shake itself until both its cheeks butt-slammed tagether makin’ a thunder-like sound dat rocked da trees aroun’ it so hard dey all ex-foliated a’ once.  Den it kinda made a fartin’ soun’ and it wabbled off inta ta woods, leavin’ behin’ it da foul smell I talked ’bout be’fer.  Lucky fer you all I gots dis picture of it.  I knows no one’d believe me utterwise.  It was a terrifyin’ experience.  Blessed be Jeebus fer seein’ to it dat I did survive dis encounter wit da monster known now ‘n ferever more as, Bigbutt.” 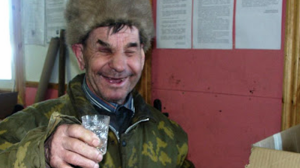 Bigbutt Witness And Photographer, John “Sharp-Nipples” McGinn Takes A Shot Of Vodka In Honor Of The Beast