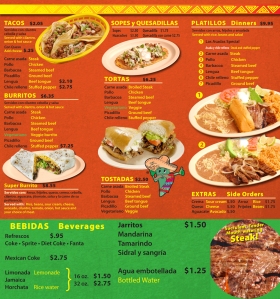 This 2000 Year Old Menu For Mexican Food Was Found In A Jug Inside A Cave Near The Dead Sea. It Is Believed To Be The Very Menu Used By Jesus And The Disciples During Their Last Supper Together

Necrophiliac City, Israel.    In news today that has anachronistically rocked Christendom, Biblical scholar and professional ballet dancer, Idont Wana Kissya, announced he has discovered the menu used by Jesus and his disciples during the last supper. “I was practicing some pirouettes this morning in a dark, dry, smelly cave near the Dead Sea,” Mr. Kissya said. ” In the midst of one of my more spectacular twirls, I tripped over an old, clay jug and knocked the lid off of it.  Inside I found a menu for Mexican food that was signed by Jesus and all twelve of his disciples with the words, ‘For The Last Time’, written on it in sheep’s blood.  Even though the anachronistic nightmare this creates is hard to get one’s mind around, I can not help but believe the document to be 100% authentic and just over 2000 years old.    When dealing with Jesus, we must never forget we’re dealing with a timeless, space-less, immaterial, boundless being for whom the laws of physics and common sense do not apply.  The menu will be taken to Turin, Italy were it will be locked away with the famous burial shroud of Jesus that’s kept there for people to gaze at once every few hundred years or so.  In the meantime, for those Christians interested, if you wish to be closer to Jesus tonight, order a few steak burritos.  We now have undeniable proof they were Christ’s favorite food.”