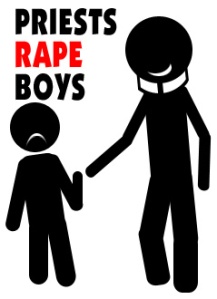 Because It Feels Good, Says The Vatican

Vatican City, Rome.  Vatican spokesman, Cardinal Bob Onboidick, said today that priests not only rape children because it feels good, but because they know they can almost always get away with it. “Look,” said Cardinal Onboidick this morning, “placing your penis into a child’s orifice, any orifice, feels WONDERFUL! But doing it to a child who trusts you as God’s representative on Earth, well, that feeling is indescribable to anyone who isn’t in a position to abuse a child in such a way. And, I gotta tell you, knowing that the hierarchy of the Catholic Church will bend over backwards to hide and protect us after we’ve been accused of raping children, just makes raping them all the more desirable.

We priests receive an amazing amount of undeserved deference from our followers just because we’ve convinced them Jesus is a real dude and we personally have a connection to him. Why not take advantage of that and rape their children when they entrust them into our care? We absolutely LOVE it! We’ve been raping children, and being excused for it, for well over a thousand years now, and we see no reason to stop. The Catholic Church is a religion: a faith-based organization that can not be touched by the normal laws of man because humans think invisible, non-existent deities are far more important than the orifices of their very own offspring. We, at the Vatican, want to thank the followers of Jesus for allowing us the continued opportunity to fuck their children. We like it, and we’ve no intention of ever stopping. Thank you once again, and please, don’t forget to give money to your local Church during mass this Sunday. Amen.”

That Big, Purple Lollipop Is For You Timmy. Just Come A Bit Closer And Put It In Your Mouth