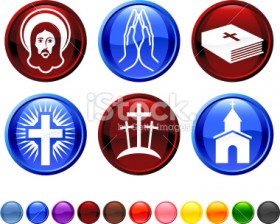 Symbols Of The Christian Conspiracy Which Has Taken Over America

Dan U. Gotabjokin, special FBI agent in charge of conspiracy investigations, reported a startling discovery today. “Christians have infiltrated America at every level of our Government,” said Agent Gotabjokin. “The President, as well as almost every member of Congress, has been seduced by this homophobic, misogynistic belief system which practices ritualized cannibalism as its central ceremony. Vile doesn’t begin to describe the insipidness behind this powerful conspiracy which has ripped the laws of America out of the secular hands of normal men and women and placed them into the hands of little boy rapists and hate-filled homophobes who, like evil versions of Johnny Appleseed, have spread their seeds of hatred and contempt all across America.  These Christians have also conspired to, and received, a tax exempt status at all levels of Government simple because they espouse a belief in an invisible deity. How this has happened is beyond my feeble mind to comprehend, but I must say, I am sickened by it. And I am embarrassed to call myself an American today, for my America is not one that is governed by a hate-based faith like Christianity, but one that is governed by all the people, for all the people, all the time. Shame on you America for allowing this devil to invade your spine like this. Shame on you. And if gods do exist, may they have mercy on you if you ever stand before them. I sure as hell would not.”