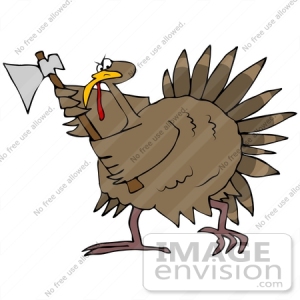 Turkey About To Behead Its Capture

Fort Wayne, Indiana.  In unexpected and shocking news today, a band of renegade Thanksgiving turkeys broke free of their confinement cells and beheaded those who were about to behead them. “We’ve simply grown tired of members of our species being killed and eaten every Thanksgiving,” said one of the ax-wielding turkeys earlier. “We have feelings, too, and, by god, we will fight you humans with every once of our beings until the mindless slaughter of our people ends!” These were the last words the turkey said before being torn to shreds by one of the large hunting hounds released into the renegade flock to destroy it. All turkeys not killed by the hounds will be beheaded and shipped to stores in plenty of time for Thanksgiving. Thus, though this incident is certainly an inconvenience for the families of those killed, it should in no way alter the holiday dinner plans of anyone else.