A re-post of one of my first posts. 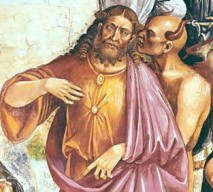 During a rehearsal today for his upcoming production of “Hamlet”, Jesus was warned by His brother, the Anti-Christ, that His fly was open. “Thank Myself he did that,” said The King of Kings, “I can just imagine how embarrassing it would have been to be in the middle of “To be or not to be” and have people laughing cause my fly was wide open. Ugh! My brother gets a bad rap, but deep down, he’s a pretty good guy. You just have to get to know him is all.”
“Hamlet” will open this Fall in Chicago with Jesus as Hamlet, Moses as Polonius, Mary Magdalene as Ophelia, Abraham as the Ghost, and the Anti-Christ as Laertes. Satan is rumored to be playing Claudius, though that has not yet been officially confirmed.