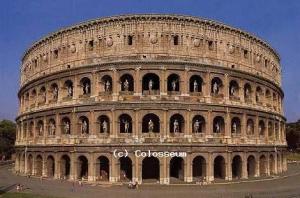 Fox News today reported that several American tourists who recently visited the Roman Colosseum decided that it clearly must have been built by advanced aliens. “Shit,” said one of the really fat Americans with an extended forehead and three missing teeth, “there’s no way in hell any human beings could’ve built such a big thing without the aid of space aliens. Humans are just too gosh darn dumb and lazy. And aliens built them there pyramids in Egypt, too. No dumb ass group of people could’ve done any of that. Look at how damn stupid and lazy most of us are now. Back then it was all drinkin’ and sexin’. Not buildin’ and thinkin’. It was aliens I tellz ya, aliens!”