Fox News announced this morning that Saint Paul, creator of Christianity, and Mohammad, creator of Islam, will fight to the death this Sunday at 8PM on the patio of Todd’s Crawdad Emporium in South Bend, Indiana.”We’ll be broadcasting the event live,” said Fox News Sports anchor, Gary Dobsinskiebergstein.

I’ve Altered A Few Things To Make It Read Better

“Of course, we here at Fox are hoping St. Paul kills Mohammad and very, very slowly, too, because he’s Islamic. We here at Fox News are Christians, and we bask in the light of Jesus’ love for us and those exactly like us. Thus, we hate Islamic people because they deny the divinity of Jesus, the guy Paul said was God, a really long time ago, and people just took his word for it. I personally hope Paul flays the bastard, slowly, keeping the skin intact in one piece. That way, Paul can mock Mohammad even further by wearing his flesh as he disembowels him, fries his intestines in a pan, and shoves them into his mouth while shouting, ‘Doesn’t pig taste delicious, you fucking Muslim dog!’ 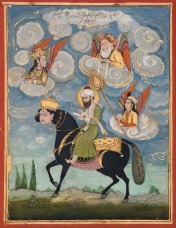 Say Guys, Why’d Mohammad Tie that Head To His Horse?

After Mohammad has finished eating, Paul can reach into his chest, tear out his beating heart, toss it onto the floor, and stomp it into a bloody pancake before flushing it down the toilet. Finally, after Mohammad’s body is quartered and given to atheists to eat, Saint Paul can say mass. We all can share in the glory of Christ’s love for us by consuming his flesh and drinking his blood. That’s what we here at Fox News hope happens. But if, for some God awful reason, Mohammad gets the upper hand on Paul and kills him, the Fox News team will tear him into bloody pieces with our bare hands. We’ve done it before, and if need be, we’ll do it again. So be sure and watch Sunday. You’ll regret it if you don’t, especially if you love Jesus like we do.”

11 thoughts on “Saint Paul VS Mohammad: A Battle To The Death, Sunday On Fox”