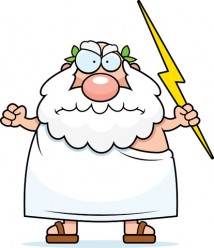 It was brought to my attention, that Ken Ham, Creationist and intellectual Neanderthal, commented, when I satirically said I was going to eat him for Christmas dinner a while back, that I was only picking on him because I was afraid to pick on Islam. Well, Ken, you were wrong. I’m going to pick on Islamic Fundamentalism right now, but don’t think that gives you a pass. I’m going to pick on you, too. I’ll use The Bible and The Qur’an to look for parallels between the primordial workings of your frontal lobes, and the withered frontal lobes of those practicing the hate-ridden, subhuman, bestial religion known as Islamic Fundamentalism. See, little Kenny, I pick on Islam, too. Stupid this or stupid that, it’s all the same, stupid.

Here’s how this will work, folks. I’m going to comment on two direct quotes from The Qur’an, and two from The Bible. First, I’ll quote from the Qur’an, comment on how moved I am by Allah’s words; then quote from The Bible, which Ken Ham says is literally true, and offer my comments on that. Since Ken Ham says every single word in the Bible is true, I am taking everything in it to represent his personal beliefs 100% accurately. And I mean word for fucking word, literally, as written, with no room for interpretation. That clear, little Kenny. Good. Here we go.

The Qur’an, First Quote: Christians and Jews (who believe in only part of the Scripture), will suffer in this life and go to hell in the next. 2:85

Lovely, ain’t it? Just lovely. And why, oh why, does everyone insist on hating the Jews? Man, those folks have had a rough fuckin’ ride. Hey! Christians! Yes, you! Christians! How does this quote make you feel? There are mother fuckers out there who believe this is God’s word. They hate you. Millions of people hate you. How do you fucking feel about that? Their “faith” is stronger than yours, Christians. Like that? Little Kenny, how ’bout you? This shit is taken literally by many, many Muslims. How the fuck do you like that? Oh, they’re not joking, little Kenny. They REALLY want you to suffer. Does that make you feel good?

The Bible, First Quote: Deuteronomy 25:11-1: If two men are fighting and the wife of one of them comes to rescue her husband from his assailant, and she reaches out and seizes him by his private parts, you shall cut off her hand. Show her no pity.

I actually like it when women grab my cock, even if I’m in a fist fight with another dude when they do it. Hell, I encourage them to use both hands. In case one falls off during the fight. But Ken Ham believes a woman who does something like this must have her hand cut off, without pity. Kenny, you violent son of a bitch! I didn’t know you had it in you. Wow. Literally reading the Bible makes me very afraid of you, Kenny. Very. You’re a psychopath. I’m just fucking around with my writings, but you, you take this shit literally, as God’s specific, unchangeable words and desires. Fuck you, Kenny. And don’t give me this shit that Genesis is literal but other parts of the Bible aren’t. The Bible is or is not to be taken literally, you violent misogynistic psychopath, you.

The Qur’an, Second Quote: Part One: Allah says that you must keep fighting until there is no more persecution and everyone on earth is a Muslim. Then you can stop killing people. 2:193a

Part Two: But if there are any wrong-doers around after you’ve killed off all the disbelievers, persecutors and aggressors, then you’ll have to kill them too. 2:193b 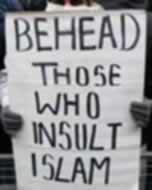 Criminals get killed AFTER all the disbelievers. Nice. Whenever someone tells you, or you hear, that Islam is a religion of peace, and love, reread this verse. Reread it until your eyes bleed. Millions of people on Earth, right now, today, this second, believe, with all the power “faith” brings to people, that these words are true and are to be carried out. Combine this with the hate-filled, disgusting rhetoric of Fundamentalist Christians, and we have a really, really fucked up situation. It is not OK to give faiths or beliefs or religions any type of special deference as a society. Continuing to do so will destroy us. This kind of black and white religious thinking is increasing, not getting better. It is coupled with a powerful anti-science sentiment as well, and this is not OK. It is sickening. Horrible. Terrifying. And Ken Ham, you are as guilty as your Islamic counter parts in feeding this process. It will annihilate the human race and leave nothing of us behind if we don’t stop it. Reread the verse above. Now reread it again. Now, use your fucking head about how important “faith” really is to mankind’s survival and grow the fuck up. 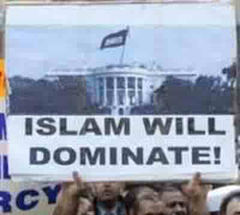 So, little Kenny Ham is a fucking cannibal! What an hypocritical son of a whore you are, Kenny. I’m writing over the top, hate or love it, satire. I don’t mean it LITERALLY!!! But YOU! You, Kenny! YOU DO! You sick fucking bastard! The Bible, literally! Word for word! Really, Kenny. So tell me, you sick twisted excuse of a man, how do boiled babies REALLY taste? You fuck! You dare call people who do not believe in your god sinners, evil, doomed, cannibals, immoral, and corrupt, and then say you are a devotee of The Bible, which you take LITERALLY! You sick son of a bitch. What a pair of balls you have on you. You know, I hope your god, Jesus, is real. And when you die, you actually get called out on all the evil you do, and all the pain and hurt you bring into the world by condemning people who simply disbelieve in your god. I hope Jesus personally escorts you into the Hell you condemn others to. 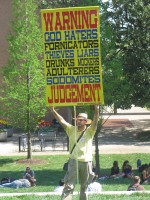 Christianity Is About Love?

You, little Kenny, read the Bible literally. It is you who boil and eat babies, literally. And as far as my limited human mind can tell, The Bible, literal or not, was not written as a piece of satire. Fuck you, Kenny. Take a long look in the mirror before you ever think of passing any kind of judgmental thought on any of your fellow human beings ever again. And take a fucking science class, will you? The Earth is 6000 years old only, unbelievable.