Hello, my name is Harvey Bernstein. I am a gay Jewish Rabbi and a member of The Illuminati.  Please try to understand that in a paranoid Christian culture, like America’s, Jews aren’t always looked upon with great favor, and gays!? Well, gays and Christians go together like hot coals and human flesh. Ouch! 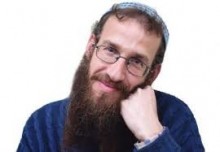 Harvey Bernstein: Rabbi, Gay, And Member Of The Illuminati

So, we gay Jews started the Illuminati to blow smoke up the asses of those Christians in America who scorn us and seek to deny us the right to marry each other simply because we are not the bigoted, narcissistic ninnies they are. We found that making up the most inane and ridiculous nonsense to sell these paranoid Christians was so bloody simple, that it became great fun to do.  It is now a favorite play time activity for our children (many of whom are adopted because, well, we’re gay) to come up with silly Illuminati stories to sell the Christian Americans who crave such fodder.  All that nonsense about Beyoncé and other folks in the recording industry being demons and devils was made up by my 10-year-old niece, and even SHE thought no one, not even a paranoid Christian American, would believe it it’s so dumb. But, as any conspiracy nut will tell you, not only is it believed, it’s become part of the paranoid Christian American cannon. I don’t expect any true paranoid Christian American to believe what I’m saying here, but I decided to say it anyway if for no other reason than to fuck with them just a little bit more. I’ve grown to enjoy it over the years, and have truly found no end to amount of absolutely ridiculous bullshit these people will blindly believe.  No wonder the story of a resurrected crucified guy was such an easy sell to these ninnies. Bloody knuckle-heads believe anything anyone tells ’em to. Now, if we could only get them to accept that gays and Jews are just as human as they are and not their enemy, we’d have performed a true miracle.

21 thoughts on “Illuminati Declare, “We’re All Jewish, And We’re All Gay.””