J.J. Abrams announced today that Rudolph the Red Nose Reindeer has been cast in the next “Star Wars” movie as a Sith Lord called, Darth Nose. 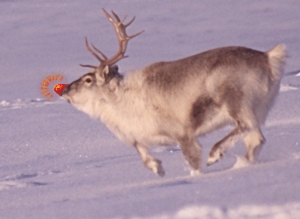 Rudolph As Darth Nose, Dark Lord Of The Sith

“It’s gonna be great when Darth Nose fights the older, wiser Luke Skywalker,” said Abrams. “Luke will be physically over matched by the Sith Lord, but will use his great wit, like a self-awarded Nobel Prize winner ripping on conspiracy theorists, to mock the Dark Lord into submission. Luke will repeatedly make fun of Darth Nose’s name, saying things like, ‘If you have a question, ask Darth. He NOSE everything,’ and ‘Who NOSE what evil lurks in hearts of men? Darth NOSE!’ It’ll be hilarious and poignant at the same time. I’m ecstatic, also, that we got Rudolph to play the part because, not only will it save us over a million dollars not having to put a CGI nose on a regular reindeer, Rudolph is one of the finest actors working today. I saw his Hamlet last year, and it was so brilliant I literally wept, openly, freely and often.  Now, if  I can just get Santa to play a Jedi Master, I’ll have my whole cast set. Santa was in a version of ‘King Lear’ recently, and I simply do not have enough superlatives to describe his performance. In my honest opinion, no one will be able to play Lear again after that. It was truly THAT amazing. So cross your fingers for me, cause I’m meeting with him tomorrow about the movie. I’ll certainly let everyone know what comes of it. Until then, May the Force Be With You.”