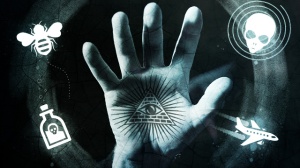 Dedicated followers of conspiracy theories expect me to believe that the American government is so powerful and omnipotent it secretly murdered 3000 innocent people on 9/11 and has kept hidden, for 50 plus years, the greatest discovery in the annuals of human history, space ships and aliens from another world. I’m also expected to believe that the U.S. government is so omnipotent it has been able to prevent all those involved with these massive cover ups from ever publicly stating, “Hey, I know who placed the explosives on the infrastructures of the Trade Center buildings!” or “Hey, I’m having diner tonight with the advanced alien species we keep hidden in the desert. Stop by and meet them.” It’s absolutely unbelievable to me, given the diarrhea-like nature of the human mouth and its incessant craving to blab about even the smallest thing, that the American government has been able to do this. This is one reason I do not take conspiracy theories seriously. The recent case of Edward Snowden is another.

Why couldn’t the omnipotent U.S. government stop Snowden from doing what he did? Why? Really, the same all-powerful government, that miraculously keeps everyone involved in the murder of 3000 people silent and keeps space aliens hidden in the fucking desert, can’t prevent a low-level NSA employee from yapping to the press about illegal internet and phone spying? Absolutely absurd.

Edward Snowden worked for the NSA, the one fucking department the U.S. government MUST have covered for leaks if it really does have aliens hidden away and it really did murder 3000 people on 9/11. But it didn’t, did it? No. Osama bin Laden killed those people on 9/11. And any alien species that has figured out a way to transverse the cosmos and come here is NOT hanging out in a fucking U.S. Army bunker in the New Mexican desert. It’s idiotic and asinine to believe such a thing. Just like it is idiotic and asinine to believe in conspiracy theories that bestow god-like abilities on organizations made up of mere mortals.

2 thoughts on “A Nobel Prize Worthy Opinion On Conspiracy Theories”